Secrets of Reading a Modeling Contract for Underwear Modeling

There are several underwear manufacturers around the world, ranging in size from multi-million dollar corporations to small firms who have their offices in the same room as they sew their garments. It might be easier to get your first modeling job by one of these several small underwear manufacturers. You will be paid considerably less if chosen to model for a small underwear brand, but will have the ability to call yourself an "underwear model." Although you are not paid much, you can use the packaging to promote yourself for future Model Jobs and include the packaging in your modeling portfolio.

You cannot be an underwear model for two different brands at the same time. For example, you cannot appear on packaging for Calvin Klein if you are on a box for Jockey. If you model for a small manufacturer, you will not be able to later pose for a larger or better-paying underwear brand due to "commercial conflicts." An underwear brand does not want a model to appear in its advertisements who also appears in its competitor's advertisements. Therefore, a model can only get hired for one underwear line at a time. If a guy gets offered another underwear modeling job, he cannot accept it.

A college guy wants to break into the underwear modeling business, so, he accepts a low paying modeling job with a small underwear brand that only pays a few hundred dollars. However, if he is offered chance to get hired for a modeling job with a major underwear manufacturer that pays $20,000 3 years later, he won't be able to accept the job because the small-time underwear brand is still publishing his photo in its advertisements. So, if you agree to be the model for a very small brand, you won't be able to be a model for any other brands until the first brand stops using your image. As long as the first company uses your image, you can't take any more jobs - even if you got paid very little by the first company. This is why you must require a time limitation to the amount of time the small underwear company can use your photos.

So, a new model needs to assure that the model release he signs sets a time limit of how long his photos can be published on packaging. If you are only being paid a few hundred dollars by a small underwear line, negotiate so that your photos can only be published for two years. Since the company is paying you so little, it should not cost much for them to hire a different underwear model two years from now.

If you want to get your foot in the door by modeling with a small underwear brand, you can agree to model for the small company by posing for photographs that do not show your face. By agreeing to faceless photos, you avoid the commercial conflict limitations. Even Calvin Klein displays faceless models on their boxes. Dylan Ricci's style of photography is an excellent example of excellent photography that does not show the identity of the model. 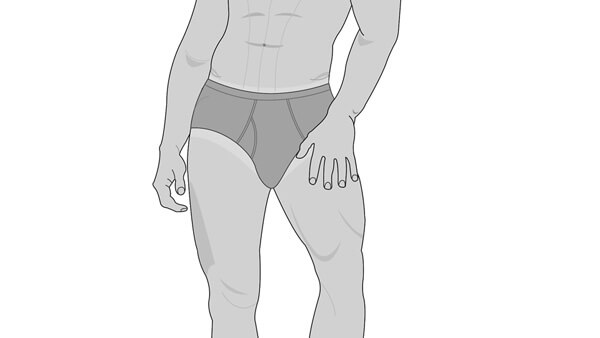 This is an example of a faceless pose. We only see the model's body from shoulders to above his knees.

Ask for Your Name to Be Printed Next to Your Photo

If your goal is to build name recognition for yourself, negotiate for your name to be printed near your image. By having your name listed next to any advertisements, you have the chance to receive later benefits from this modeling job - long after you have spent the small amount your were paid for the job. Your name need not be printed in huge letters. Professionals simply need to be able to find out who you are. Just the same size as the copyright notice which likely lists the photographer's name. So, when if accept a low-paying modeling job, you need to assure that your name is printed somewhere near the ad or photo (each and every time it appears) as:

So, when offered a small amount of money to participate in an opportunity, say "Sure, I will do it, but I will need a credit that lists my first and last name whenever my image is used."

You cannot ask for your name to be printed if you are being paid a high rate.

Ask for a higher rate for Transparent Underwear

At a modeling shoot, you may be asked to pose in many different pairs of underwear. The brand wants to receive as many usable photos during your shoot as they can. Some underwear brands sell briefs that are transparent and allow the model's penis to be seen. These underwear are usually sold by the more sexier underwear brands or brands that appeal to gay buyers. If you are asked to pose in transparent briefs, you should be informed of this before signing the contract and you should be paid 3 times the normal rate - especially if you face is visible in the photograph.